House Bolting, Foundation Bolting & Cripple Wall Bracing
The primary purpose of earthquake retrofitting is to keep your home from being displaced from its concrete foundation — making the building safer and less prone to major structural damage during an earthquake. Existing homes need to be retrofitted because our understanding of the effects of earthquakes as well as construction techniques have improved after the homes were built.

Foundation Bolting
Seismic strengthening diagram showing foundation bolting and blocking for earthquake retrofitting
Foundation bolting typically means that bolts are added to improve the connections between the wooden framing members of a building and its concrete foundation. Usually this means adding bolts through the piece of wood that lies flat on top of the foundation, referred to as the sill or mudsill, into the concrete. There may be no existing bolts, or the existing bolts may be either weakened or too far apart to be strong enough for earthquake resistance.

Careful planning, placement and installation of foundation bolts are critical for good bolting strength. It is important to use the proper type of bolt corresponding to the existing conditions of the home and its foundation. The expected type of bolt load or stress is another important consideration for bolt selection.

Expansion Foundation Bolts
Expansion type foundation bolts, also known as mechanical foundation anchor bolts, are the basic type of bolt used in earthquake retrofitting to anchor the mudsill to the foundation — they cost less to install, but require good concrete strength to work well. They are typically used in houses with newer foundations or when the concrete is in good repair.

The current ABAG Standard Plan A for earthquake retrofitting specifies that expansion bolts may be used as long as their installation does not cause cracking of the concrete. In these cases the mechanical type anchor bolt is very effective when the bolt is properly installed according to the manufacturer’s specifications.

Epoxy-set Foundation Bolts
Epoxy-set foundation bolts work better than mechanical anchor bolts in older homes where the concrete may be weaker than in a newer home. They also perform better when the earthquake force is expected to cause an uplift — a situation where the movement pulls the bolt upward and out of the concrete. In addition, epoxy anchors can be longer and therefore inserted deeper into the concrete. This is particularly important if there is additional base framing (blocking) added between the cripple wall studs for the structural plywood anchorage of a shear wall (cripple wall bracing).

Plate Washers
The requirement for clamping washers installed with retrofit anchor bolts has been recently upgraded. It is now mandatory to use hot-dipped galvanized 3″ x 3″ x ¼” square plate washers under the anchor bolt nut. This allows the mudsill to be clamped more securely to the foundation.

The use of this large clamping washer is important because it has been observed in recent earthquakes that the older type of round washer commonly found in houses built prior to the mid 1990s, sometimes pulled through the mudsill because they weren’t large enough to provide adequate holding strength.

Foundation Plates
Sometimes there is not adequate vertical clearance under a home to properly anchor the mudsill to the foundation with conventional anchor bolts. Simpson Strong-Tie has several anchors which can be used in situations like these. The most commonly used one is called the Universal Foundation Plate or UFP10. These plates are installed at intervals similar to anchor bolts in retrofit applications 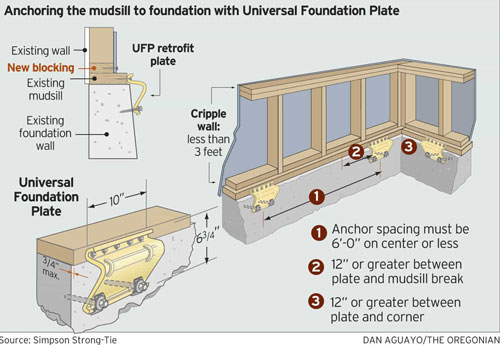 Earthquake bracing diagram comparing unimproved cripple wall with retrofitted cripple wall showing cripple wall bracing, double studding and blocking Most houses have a short wood-framed wall in the sub-area crawl space. This wall my be anywhere from a few inches to several feet in height, running upward from the top of the concrete foundation to the bottom of the main floor. In construction language, this is referred to as a cripple wall. Cripple wall collapse is a main source of earthquake related failure. The collapse of this wall will often result in the main floor dropping to the ground. The house is vaulted off to the side of the foundation as the cripple wall simply rolls out from under it.

Stiffening or bracing of the cripple wall to keep if from collapsing during seismic movement is a very important part of earthquake retrofitting. The bracing is accomplished by attaching structural grade plywood tightly to the wall framing. In engineering language, this strong or stiffened wall is referred to as a shear wall.

The stiffening effect is accomplished in the lengthwise direction of the plywood, which means that plywood runs along the side walls of a house will brace it in the front-to-back direction while plywood run along the front and back walls will brace the house in the side-to-side direction. Accordingly, it is important to brace all sides of a house for the best seismic protection.
It is usually not necessary and may even be undesirable to brace the entire lengths of the cripple walls. Over-bracing means unnecessary work and cost, and many engineers think that it is important to maintain some ductility in the sub-areas of the house.

Finally, following the principle that a chain is only as strong as its weakest length, it is also important to complete the connection from the foundations, through the walls, and into the overhead floor framing. This will provide for good load transfer. Load transfer is an engineering term which in everyday language means that the effects of the earthquake movements are transferred from one of the buildings components into the next – ground to foundation, foundation to sill, sill to wall, wall to floor. Good detailing of all of these connections is an important part of retrofitting technique.
Foundation Holdown Brackets

House bolting diagram for earthquake retrofitting showing foundation holdown brackets, double studding, foundation bolting and blocking Some houses also require additional holdown brackets to anchor the shear walls. Holdowns are specially constructed right-angle brackets connecting from the cripple wall framing into the foundation. As the bracket name implies, they are designed to resist a shear wall lifting or rolling effect, which may also occur during seismic activity. Generally, the need for holdowns is a function of the height-to-width dimensions of a shear wall configuration.

Simpson Holdowns are usually installed at the ends of shear walls. They are not needed at all shear wall locations. Installation is done with an extra-long and more deeply set epoxy-anchored bolt, which provides for better resistance to the lifting stresses. If one is in doubt about the need for holdowns, there is no harm in installing them except for the added cost. However, a good understanding of shear wall mechanics is helpful in deciding whether to save the cost and work of holdown installation.

Not all houses have cripple walls. In many newer houses, and some older ones, the floor framing (joist) rests directly on the mudsill. Compared to houses with cripple walls, houses built in this manner are considered to be slightly less vulnerable to displacement from their foundations. There is still significant risk, however. The connection between the floor framing and the foundation consists of a series of “toenails” which are often too weak to withstand strong seismic movement and the house can slide off its foundation. Even slippage of a few inches can do major damage to the house, allowing portions of it to sag and cause structural damage or to sever utility connections such as gas, water, sewer and electricity which extend from the ground into the house.

There are several methods available for improving the connection of the framing to the foundation when a house doesn’t have cripple walls. The choice of which connecting system is most practical for a given house comes down to a host of variables and ultimately includes a judgment on cost effectiveness. Older homes vary widely in their access conditions, framing size and configuration of the foundation, etc., and there is usually not a “single” correct way to improve this connection.

Simpson Strong-Tie Retrofit Connectors
One method is to install Simpson UFP10 mudsill anchor plates in conjunction with Simpson L70/L90 clips connecting the mudsill to the rim joist. The spacing depends on the size and weight of the house. A second method is to anchor the floor joist system directly to the foundation using Simpson FJA anchors.
Angle Iron Struts and Foundation Bolting

Earthquake retrofitting diagram showing angle iron sheer struts bolted to the foundation for houses without cripple walls
A custom connection upgrade is to use Angle Iron Struts, which connect the floor joists directly to the foundation in a similar fashion to the Simpson FJA anchors. Earthquake Safety devised the angle iron strut connection in the early 80s with input from several colleagues who were structural engineers. They offer a significant increase in connection strength, and for many projects they provide the most economical upgrade available for the existing conditions. The calculated strength of the angle iron is higher than the Simpson FJA anchors. These are not over-the-counter connectors, but have to be custom made at a steel fabricator.

The angle iron struts are installed in such a way as to provide both a vertical (lift resisting) and lateral (slide resisting) anchor for the house. The struts reinforce any weakness in the original sill bolts and extend the anchor more completely into the house’s main floor platform.

Many houses, especially hillside houses, have both cripple walls and areas where the floor sits directly on the foundation. In this case, a combination of retrofitted improvements may be called for, including mudsill bolting, Simpson mudsill plates holdowns, plywood shear bracing and angle iron struts.
Soft Story Situations

Another condition found in many homes, especially those with attached garages, is referred to as a soft story. This is a situation in which a living space of the house, a bedroom for example, has been built over a large opening such as a garage door. Such an opening has little or no stiffness or shear strength. Thus, comes the term “soft story”, meaning a story of a home built over a wall area that is “soft”” in its resistance to lateral movement.

Soft story conditions can sometimes be improved by installing plywood bracing on a wall that is next to and inline with the opening. If the configuration of the home doesn’t lend itself to this solution an engineered steel moment frame can be an option.
*Source: Earthquake Safety

Call Hugh for a quote. Great work and at a reasonable price.

Hugh & his guys were such a pleasure to work with, they had good communication with us through the whole project

Hugh and his crew helped us make our rental home remodel go as smooth as possible.

First rate for professionalism, friendliness, trustworthiness and attention to detail